I very much enjoy and very much value documentaries on horror fiction and horror films. In a blog post from last year, I highlighted one of the earliest horror film documentaries—Terror in the Aisles. That production was more of a straight-forward documentary, tracing the evolution of horror films up to that time.

This post looks at another horror documentary. This creation from 1990 was produced by the BBC in a narrative round-table-style format.  - I had never seen anything like it and I truly  believe that no program has even come close to rivaling its significance. 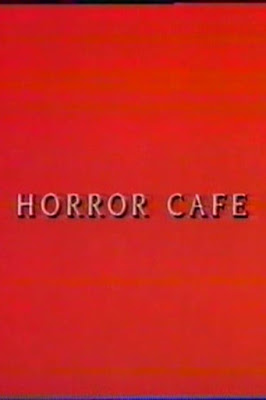 "April 1990—six fevered imaginations are gathered for dinner at the Horror Café; their task—to create the ultimate horror movie for the end of the millennium, the year 2000. They take as their starting point Robert Louis Stevenson’s classic nineteenth-century horror tale, Dr. Jekyll and Mr. Hyde."

The opening of the announcer’s voiceover

§
Even though actual filming occurred at Lime Grove Studios on 5 April 1990, Horror Café first aired as a special broadcast on BBC Two TV’s The Late Show on 15 September 1990.

I have heard rumors of a DVD version existing, but have not been able to confirm it. The first and (so far ) only way I have found this program was via YouTube. The September 1990 airing and the version I saw on YouTube ran to 81 minutes.

Six icons of the horror genre gathered for dinner so that each could express their own thoughts and feelings on fear and horror. Seated around the table were:

•Clive Barker – host (author), an English playwright, novelist, film director and artist. He was initially known for his weird fiction. Barker’s art has been featured in his books as well as galleries.

•Lisa Tuttle (author) who, with books like Familiar Spirit, A Nest of Nightmares and Gabriel, is hailed as one of horror’s most innovative and exciting writers.

•Roger Corman (producer & director) is an American film director, producer and occasional actor. Corman’s influence on modern film cannot be over-hyped. His impact upon modern horror film has been foundational.

•Peter Adkins (screenwriter) grew up in Liverpool along with Clive Barker and Doug Bradley. A well-known genre author and screenplay writer, Atkins authored the scripts for Hellraiser II, III, IV and The Wishmaster.

•John Carpenter (director), an American filmmaker, screenplay writer and composer, is best known for his work in the horror and sci-fi genres in the 1970s and 80s. Many of those works have become genre staples and cult classics.

•Ramsey Campbell (novelist), an English horror fiction writer, has been writing for over 50 years and has authored over 30 novels and countless short stories. In addition, by many leaders in the genre, he is considered to be in the same league as H. P. Lovecraft. 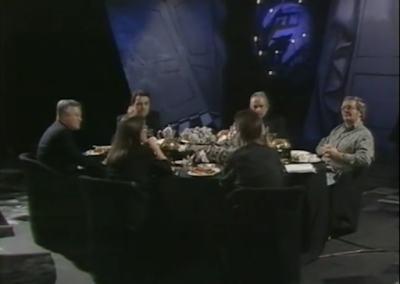 George C. Romero was originally supposed to appear, but he cancelled at the last minute. His place at the table was ably  taken by Peter Adkins. But,  even so, I regret that Romero did not take part.  His input and thoughts would have been invaluable to the horror genre.

And speaking of regret, there is one other aspect of this broadcast that is a major disappointment. When originally aired (and on YouTube), its length ran to 81 minutes as I stated above. However, in the comment section of a Reddit post, dated 30 November 2015, Ramsey Campbell stated, in referring to the 81 minute broadcast from 1990:

We actually shot for three hours - this is the edit that was broadcast. It was Roger's birthday, and much champagne was consumed afterwards.

Later, in the same Reddit post comment thread, when asked if the 3 hour version is available anywhere, Campbell responded with “Not that I know of, alas.”

Three hours! This round-table went on for three hours and all we got was 81 minutes! Less than half! Imagine what gems were left on the cutting room floor!

Yet, all hope is not lost.

In the November 1990 issue of the British horror movie magazine, Fear, is the only detailed description of Horror Café in print that I have been able to unearth; not a transcript per se, but a detailed summation nonetheless. 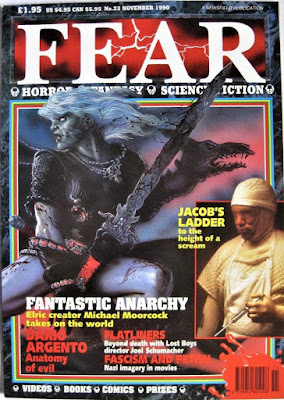 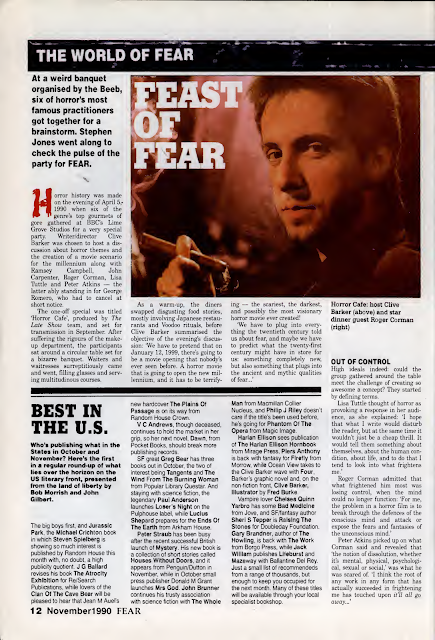 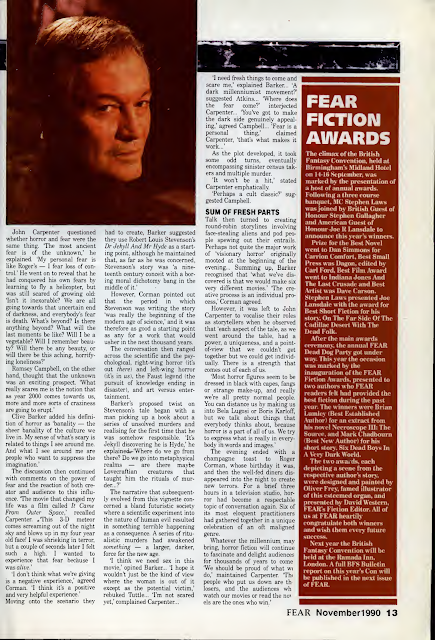 And, making this article even more significant is that the article talks about the full 3 hour  version and not the 81 minute broadcast version! It delivers tantalizing glimpses into the topics and  dialogue that were excised out. It is well worth the effort to track down. A link to download a PDF version of the magazine is here.

The stated premise of this round-table discussion was to create “the ultimate horror movie for the end of the Millennium.” It proved a focus for wide-ranging discourse and provided a mandate they could return to. There are two quotes from the broadcast (and YouTube) I would like to particularly highlight. First, and beginning at 9 minute 17 seconds, in response to and elaborating upon something John Carpenter had just said, Roger Corman explains:

It was earlier stated, uh suggested, that what we were doing is giving a negative experience. I don’t think in any way it’s a negative experience. I think it’s a positive and very helpful experience. Both on the basis of what John said and also if you go into a Freudian interpretation…If you are touching some fear in the unconscious mind, according to Freudian theory, by exposing that fear, by bringing it to the surface, you can actually help the patient, as it were…

I was very impressed and surprised by Corman’s comments and insights. In a like manner, a quote from John Carpenter at 14 minute 32 seconds is worthy of note:

And, a little further along, Carpenter very briefly picks up that thread again at 17 minutes 25 seconds:

‘Cause isn’t that primitive man sitting around the fire, and, and the sounds out in the night.

Although only reflecting a tiny sampling of what was said in the broadcast, taken together, these few comments expanded my understanding of the horror genre as well as my appreciation for it. In particular, Corman’s and Carpenter’s thoughts and comments were incredibly profound, coming not from academic outsiders, who only study the art, but rather the creators themselves expressing their vision.

Corman’s confident statements on Freud and the psychology behind the appeal of horror were a worthy complement to Carpenter’s cinematic talent to scare the hell out of people. Carpenter’s innate understanding of what horror means, was a treat to behold. Of particular note and significance to my understanding of the nature of horror fiction, Carpenter’s linkage of primitive man with his theories of horror was invaluable to me. Brief and in passing though it was, it highlights the truth that a sense of horror is rooted in mankind’s deepest past; something that humans have carried with them from their earliest days.

It is well worth the time to track down the broadcast version of Horror Café found on YouTube. Even if only the edited version and not the full 3 hours; a careful reading of Fear magazine’s November 1990 issue will offer a peek into the full version.