A Brief Consideration of THE WITCH OF PRAGUE by F. Marion Crawford

To further explore my studies into 19th century supernatural fiction and Victorian culture in general, I read The Witch of Prague & Other Stories by F. Marion Crawford. 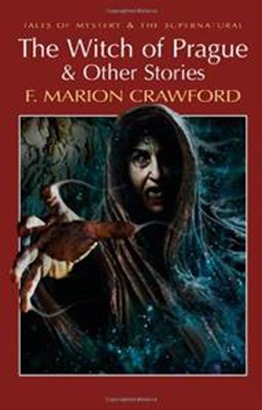 This work is essentially divided into two parts. The first, taking up the first third of the book, is made up of eight wonderful short stories. The second, taking up the remainder, is the novel The Witch of Prague. Published in 2008 by Wordsworth Editions, The Witch of Prague & Other Stories is part of the Tales of Mystery & The Supernatural series. A fine series of reprints which I whole-heartedly endorse.

Crawford, an American, was a highly prolific author from the late 19th and early 20th centuries. He wrote in a variety of genres including historical fiction, drama and nonfiction. While his supernatural and weird fiction only make up a small part of his corpus, it has had a lasting impact on the genre. Indeed, if Crawford is remembered today at all, it is for his weird tales. The eight short stories included here are all of the supernatural genre. For the most part, they were published in the early years of the 20th century, well before the outbreak of World War I. The novel The Witch of Prague was originally published in 1891.

An earlier edition of The Witch of Prague was published in 1974 under Dennis Wheatley's Library of the Occult series. 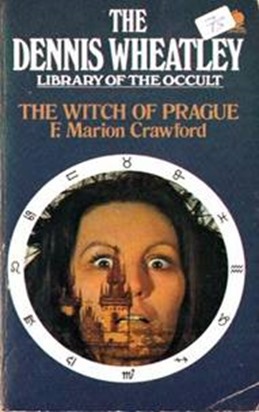 In its introduction, Wheatley referred to The Witch of Prague as "...another classic of occult fiction." I can't say that I remember ever reading anything designated as a work of occult fiction before. Really, I don't know what "occult fiction" even is!

The interactions of the five principal characters; the Wanderer, Unorna (the Witch), Keyork Arabian, Beatrice, and Israel Kafka, make up the entirety of the novel. The different characters serving as mouthpieces for the author to expound on his varied philosophical beliefs concerning life, love, and death. These expositions and numerous internal dialogues reflect on the new idea of the mental sciences and in particular that new wonder of science called hypnotism.

I will not offer a summarization of this novel. Other reviewers have supplied such and their information will be found in the References section at the end of this essay. However, in my opinion, it is enough to say that this entire work can be reduced to the phrase "Love will have its sacrifices" ala Le Fanu's Carmilla.

Additionally, in the several reviews of this work that I have perused, each bemoan the long internal expositions that the characters ponder. These reviewers state that a good deal of harsh editing would have made this passable novel into a better short story. From our modern perspective that may be true. However, this work is a product of its time, 1891. The approach to science and mental powers expressed in this novel were relatively new ideas to the general public, necessitating a detailed presentation of the salient arguments. Further, attempting to hold something written over 120 years ago to our modern literary sensibilities does no justice to the original work or our ability to understand and appreciate it.

Wheatley, Dennis. "Introduction to The Witch of Prague", 1974.

Books Jonelle Made Me Read II – Sing Me To Sleep

In this occasional series, I will be discussing books that a tweenage girl (now a thirteen-year-old), Jonelle, instructed me to read. And when I say "instructed me to read," of course I mean "commanded me to read." For those of you who don't know her, she is a highly intelligent, sweet, precocious and fairly bossy young lady.

A large part of the reason why I read this book, and the other works that will be discussed in this blog series, is that I want to understand how tweenagers think. These posts will not be a review of the book per se as much as an exploration of my random thoughts on the book.

How did I get myself into this?

I could hear the guys practicing even though my music was blasting. I was still mad at Jack, but not as much as before.

When I went down stairs to the kitchen, I remembered that I still had to pack for the Glamor Kills tour that was starting in three days. The guys had invited me to go with them. I loved touring with them. It's always impossible to have a bad day when you're sitting on a bus with all of the band and crew members of all time low. The last time we were on tour, two hours before we left my boyfriend of two years broke up with me. I was miserable and heartbroken, that was until Alex found out about it. Alex would say how he didnt deserve me and that the next time he saw the guy he would personally kick his ass just for me. At one of their shows my ex, John, showed up to talk to me. Right before the guys went on stage John walked up to me and started to ask me to forgive him. I didnt think that anyone saw our conversation (and i kind of hoped not because I ended up crying), but when the guys went on stage, Alex saw John standing in the front row and he said "You asshole, look at me! You talk to my friend again I'll kick your fucking ass."

Everyone laughed except for Alex, John , and Jack. I cried.

When I opened the door to the kitchen I saw Alex standing infront of the open fridge. He was wearing a very tight black t-shirt and a pair of skinnys that matched mine. I went to the fridge and slipped my arm passed his concentrated face to grab a coke.

"Hey Alex" I said hopping on to the counter. "Hows practice going?"

"It's going great." He said as he moved so he was standing right infront of me. "Do you want to come watch?"

"Oh yeah that's right. I have to pack too. Thanks for reminding me."

"Well guess I have to go girlie." he said patting my knee before chugging his coke and ran down the stairs.

Another Thing Jonelle Made Me Read

Sing Me To Sleep by harley30. 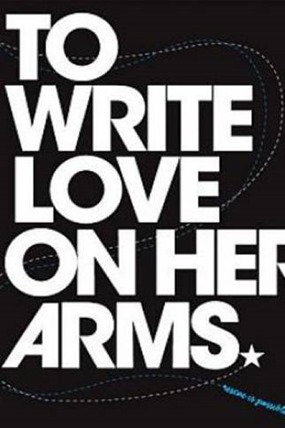 A few weeks ago, I was working on the next installment of "Books Jonelle Made Me Read" discussing The Angel Experiment, first part of the Maximum Ride series, when Jonelle insisted I stop and read a work found on wattpad.com, Sing Me To Sleep by harley30. This piece of fan fiction concerned the music group, All Time Low. Prior to Jonelle's insistence, I had never heard of All Time Low and I could have lived the rest of my days happy in my ignorance. But she asked me. And I did as she asked.

This is not really a book per se, more like a long work of fan-fiction. And, yes, I know the book cover image above does not reflect the story title. But that is how the author presented it, so that's how it is. Aside from a few spacing issues, the extract above is taken directly from wattpad.com, errors and all. This lack of polish and editing reflect one of the hidden strengths of online services like wattpad.com. Authors, just starting out or fairly well established, can make available drafts of their works and allow readers to partake of their writing at no cost; kind of a "try before you buy" service for readers. It also allows authors to receive feedback on works still in the developmental stage.

As is typical for fan-fiction, the subject matter highlights issues, situations, and themes that are meaningful to the fan-fic author or that the fan-fic author wishes to explore. The characters experience this alternate reality through the course of the fan-fiction story. As for this prolific author, I know nothing about harley30; except that she is devoted to All Time Low. I believe the author is a young adult exploring the challenges and difficulties in emotional relationships among youth in a safe and constructive format, i.e. better to write fan-fiction about it rather than live it. Sing Me To Sleep touched a chord somewhere. As of this date, in total, this work has been read in excess of 440 thousand times! Containing 44 chapters, that averages out to more than 10,000 reads per chapter!

The storyline in Sing Me To Sleep is basic. The main character is the fictional sister of one of the All Time Low band members. Her interactions and romantic liaisons with the other band members make up the entirety of this work.

For me, reading this work was very stressful. Nearly every conversation ended in shouting and crying and was filled with teen angst. However, this work also was quite revealing as to how the young adult mind thinks and perceives reality. I would encourage all parents of young adults (11 to 15 year olds) to read this work and others like it in order to gain better insight into your child's thought processes.

So, I sought out Jonelle's opinion and thoughts on this work. Her reaction was...instructive. For her, Sing Me To Sleep was "awesome!" She really liked the drama. And tellingly, Jonelle said that she "could totally see Jack acting like that."* Here, Jonelle seems to be indicating that the author was able to accurately capture individual personalities in her writing. And, also that Jonelle is deeply invested in the fandom.

That's when something clicked in my head.

The disquieting thought that these young adults (both author and readers) were thinking and writing in this way because of their observation of adult behavior. In other words, that the youth of today imagine that the behaviors exhibited, as well as the emotional maturity or lack thereof displayed, in this story are correct and appropriate because that is how they have seen adults act and react.

That thought left me breathless.

P.S. Oh, joy! I was just informed that there is a sequel, Scream to be Heard...And it is 79 chapters long!

* Jack is one of the band members of All Time Low.