I am pleased to announce that I have become a proud member of the Horror Blogger Alliance! 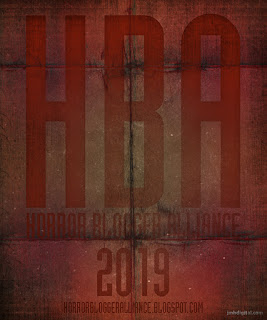 Taking a Bite Out of THE BEAST OF BRENTON WOODS by Jackson R. Thomas

“Even a man who is pure in heart
and says his prayers by night
may become a wolf when the wolfbane blooms
and the autumn moon is bright.”

The above poem, quoted from the 1941 movie “The Wolf Man,” has absolutely nothing to do with this post’s tale. 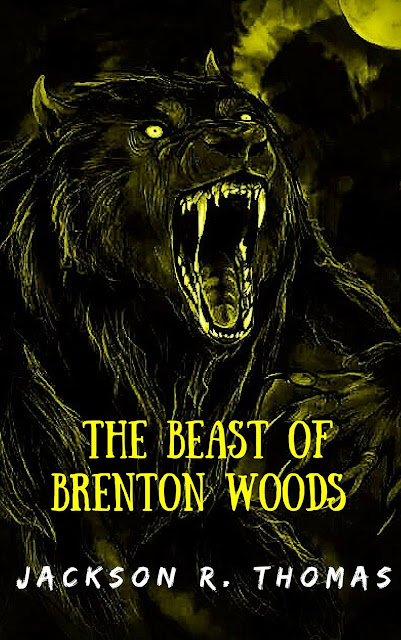 “If you boys change your minds, I’m gonna settle in down here and watch American Werewolf in London.”

He usually loved his mother’s twisted sense of humor, but as he thought about those yellow eyes, the horrible growl, and the shape rising among the shadows, he found it hard to crack a smile.

Susan Cutter’s brave front disintegrated after the boys went upstairs. She didn’t want to think about the grave possibilities Ben’s ramblings could mean. She walked to the living room window and gazed out at the backyard. Was it out there? Was it back?

Oh God, what did it want with her son.

It wasn’t possible. Scott was gone. And so too, the legend of the Beast of Brenton Woods. Susan dropped the blind and returned to the couch and her box of wine. There was no way she’d be getting to sleep tonight until the box was emptied.

Rather than the werewolf classic she’d joked with Ben about, Susan put on Downton Abbey and tried not to think about the secrets she’d been living with.

Written by Jackson R. Thomas, The Beast of Brenton Woods was released in June 2018 by Alien Agenda Publishing. This short novel ran 170-180 pages depending on format (both Kindle and print). This post is based upon my reading of the Kindle version.

There is not a lot of biographical information on Jackson R. Thomas. Thomas himself does not seem the type to discuss personal matters willy-nilly.  The Beast of Brenton Woods was his first published work, and it appears a success. 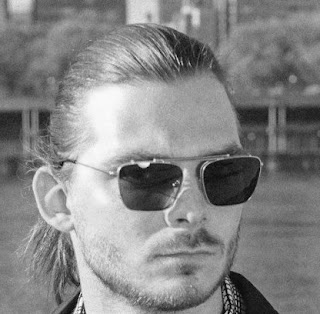 His “Good Reads” author page reveals little. He was born in ; he currently lives in Cooper Mills, . And, aside from the unsurprising fact that Thomas “loves” horror literature and horror movies, “Good Reads” disclosed that he lives with his cat, Gizmo.

I want to start off by saying that I really enjoyed this tale! In fact, I enjoyed this book so much that the only complaint I have is more of a minor nit-pick. In the text, the werewolf is referred to as “the white wolf” because of its white fur (obviously). But the cover of both the Kindle and the print version show a grayish-black furred werewolf—that’s it.

Much contemporary werewolf fiction appears to follow the Underworld/Twilight trope, where vampires and werewolves battle for dominance with some weird Romeo-and-Juliet cliché emerging. So, I was very pleased to see that The Beast of Brenton Woods is a more traditional werewolf story, with a few surprising twists. The Beast of Brenton Woods presented themes and subplots that make it a refreshing horror tale:

What makes The Beast of Brenton Woods so compelling, so different from much contemporary werewolf horror fiction, I believe, is due to several simple factors. To start with, the action starts immediately. The story opens with two boys, the protagonist and his friend, encountering the werewolf. Yet for some unknown reason, the beast does not pursue them. This mystery is the first of several that turn this tale into more than just a plain gore-fest.

While mysteries and other secrets are explored and revealed, they in no way distract from the action and gore. No time and ink is spent on exploring the origins of the werewolf.

One of the mysteries explored, however, was why the beast, the white wolf, had returned. First appearing well over a decade before (and then vanishing), the beast returned to savage the same community again. This involves one of the most interesting and complicated secrets in the tale. In no way, did I see this coming . . .

The Beast of Brenton Woods is a novella and as such does not have the luxury of exposition and flowery text. It is refreshingly to the point. By necessity, the action (and gore) is front and center. From the story’s open, it is pretty much non-stop until its conclusion. Notice, I did not say “resolution,” and this little fact adds to the story’s freshness as well.

Typically in a tale focused on a werewolf tormenting a small community, one would expect the werewolf to be the villain. In The Beast of Brenton Woods, this is called into question. Yes, there is a werewolf. And, yes it wreaks bloody havoc, but, surprisingly (and unexpectedly), the only monsters are human.

From the opening page till the last, The Beast of Brenton Woods was a thrilling read. Filled with twists and turns galore, the story kept me invested in the plotline, even surprising me a few times. In addition, I have to say that I was very happy to note that there was not even a hint of a vampire in this story.

This book was well worth the time. I heartily recommend The Beast of Brenton Woods.