By God, I love Victorian history!

London By Gaslight is one of the very few blogs which I follow diligently. As a subscriber to the blog, I received notice of its latest post this morning, 23 August 2017.

It is not my custom to re-post articles. But, this one? Oh, boy!

I had heard of the Diary of Jack the Ripper, published in the early 1990s, pretty quickly dismissed it and then forgot all about it.

Well, mores' the fool me.

Recently, I had this certain belief of mine shattered with my reading of 6 August 2017, The Telegraph's "Has the true identity of Jack the Ripper been revealed? Victorian diary proven genuine contains huge clue." This article documented discoveries that shed new light on the authenticity of the diary.

Then this post today, "Did Florence kill Jack the Ripper!"

By God, I love Victorian history!

A Few Comments on NIGHT SHIVERS: THE GHOST STORIES OF J. H. RIDDELL

It is certainly about time that I return to proper Victorian supernatural fiction. I am most pleased that, quite by chance, I stumbled across Mrs. J. H. Riddell and this collection of some of her finer ghostly tales, Night Shivers.

A little less than a year ago, I was introduced to Mrs. J. H. Riddell's work. I came across a narration of her story "A Strange Christmas Game" voiced by Michael Whitehouse.[i]

I am very glad I did. 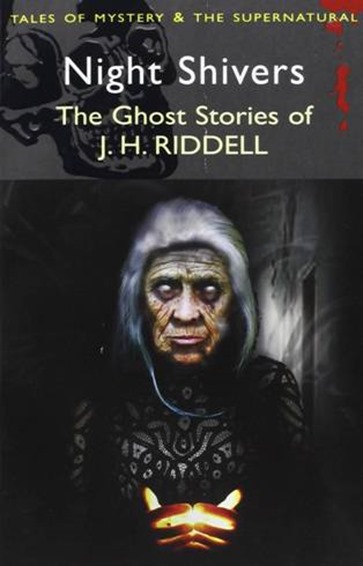 If ever a residence, "suitable in every respect for a family of position," haunted a lawyer's offices, the "Uninhabited House," about which I have a story to tell, haunted those of Messrs. Craven and Son, No. 200, Buckingham Street, Strand.

It did not matter in the least whether it happened to be let or unlet: in either case, it never allowed Mr. Craven or his clerks, of whom I was one, to forget its existence.

When let, we were in perpetual hot water with the tenant; when unlet, we had to endeavour to find some tenant to take that unlucky house.

An excerpt from the opening of The Uninhabited House

Night Shivers: The Ghost Stories of J. H. Riddell collects 14 of Mrs. Riddell's short stories and one excellent novella into a single volume. This edition, published in 2008 by Wordsworth Editions, is part of the Tales of Mystery and the Supernatural series.[ii] The General Editor of this series is David Stuart Davies, a noted expert on Sherlock Holmes. Mr. Davies also wrote the very informative Introduction to this volume.

Mrs. J. H. Riddell was born Charlotte Cowan on September 30, 1832 in Ireland. A precocious and highly intelligent child, Charlotte was a serious reader, even claiming to have read The Koran at the age of eight! She completed her first novel at fifteen. Sadly, it was never published. Due to the death of her father and in their new reduced circumstances, Charlotte and her mother had to relocate to London in 1855. Late that year or early the next, Charlotte published her first book. The year following her mother's death, Charlotte married Joseph Hadley Riddell in 1857.

I wrote under the nom de plume of 'Trafford,' for it was not considered quite the thing for a lady to write in her own name.  My husband was much amused one day when a man told him that he knew Trafford the novelist well, and that he was a 'very good sort of fellow, don’t you know?'  But though there were few ladies writing in those days it was not a bit easier to get one's work accepted than now. All my publishers would look upon my writing as a joke at first.

In 1866 when her serial tale, The Race of Wealth, was issued in book form, Charlotte ended the use of her nom de plums and had her author's name printed as "Mrs. J. H. Riddell," as was customary for a wife in Victorian England. Following her husband's death in 1881, Charlotte began a long descent into financial hardship and worsening health. A week before her seventy-fourth birthday, on September 24, 1906, Mrs. J. H. Riddell passed away.

Mrs. Riddell was a prolific writer. Some estimates claim that she wrote over forty novels and short stories. I say "estimates" because in interviews, Mrs. Riddell stated she didn't know how many of her works were actually published. Her supernatural tales make up only a part of her total body of work. This collection represents the first nineteenth-century supernatural horror fiction I have read, written by a woman.

A supernatural or ghostly tale tends to emphasize the emotional over the rational. Whether this genre was better suited for "emotional" women or not, in the Victorian era, many women authored superb supernatural tales. Economic necessity lead to many women venturing into this popular and lucrative genre. This would influence Charlotte (later Mrs. J.H.) Riddell and her forays into the genre. Also, the straight-forward format of the supernatural tale provided authors with opportunities to explore concerns affecting women of the day, such as economic and class disparity, the precarious status of women in society, and child mortality. A last possible explanation, as the woman's domain was the home, the vast majority of these tales, written by women, involved a haunted house where something scary has invaded into the safety of the home; highlighting the terror.[iv]

It is interesting and curious to note that in the nineteenth century, women did not possess the cultural or social status of men. Yet, "according to some scholarly estimates, in the 19th Century, at the height of the form’s popularity, women were contributing around 70% of ghost stories published in British and American magazines."[v]

Possible explanations for this phenomenon were varied. Spiritualism was prevalent and very popular in the nineteenth century. Spiritualism was seen as tapping into a world of emotion. Men were thought to be more of a logical, rational mindset. Consequently, the vast majority of mediums were women who were thought better able to access this world.

Below is a listing of the tales as they appear in this collection, along with select publication information. 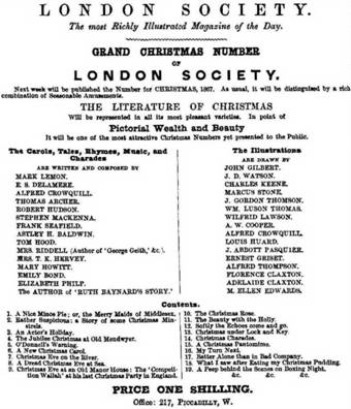 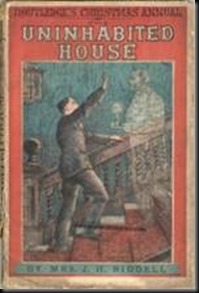 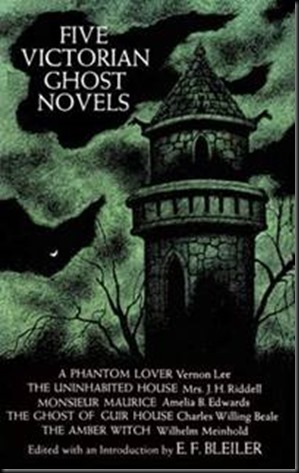 Riddell took much inspiration from the settings and environs of the various places where she lived. Many of Riddell's stories have traits and themes in common. Her tales are either set in her native Ireland or used Ireland as a background element, drawing plot points from Irish traditions. Also, her ghostly tales were shaped in large part by her precarious financial situation.

The theme of financial struggles of the Victorian middle class repeats itself over and over in Riddell's supernatural fiction; and not just the female characters. In both the short story "The Open Door" and the novella The Uninhabited House, a young male clerk agrees to stay in a haunted house for cash to aid in his pursuit of a girl. Riddell's characters are middle class, struggling to make a good life. The fear of falling into poverty are ever-present in her supernatural tales.

In Riddell's stories, a haunting occurs for a reason. Some injustice needs to be corrected. Once that happened, the haunting ended and peace returned. In many of these tales, the good were rewarded and the wicked punished. Good Victorian middle-class values.

In striving to increase my understanding of nineteenth-century supernatural fiction, I have cast a wide net; happy with any and all that was caught. However, resulting from that, I have come to realize several things.

First, regarding this particular work. Mrs. Riddell's tales exemplify what it means to be a late-Victorian supernatural story. As I wrote in an earlier post:

. . . I believe that it is possible to gain an understanding of a society by means of studying its horror fiction. By analyzing a society's horror literature and horror film, it is possible to understand what aspects or elements of itself, the society is trying to externalize and thus what fears it is struggling to come to terms with.[vi]

This is the true value of studying a time-period's literature, the horror genre in particular. By means of this, insight can be gained into what torments a society.

Second, regarding refinement. Initially, I had determined to focus the majority of this blog's energies to exploring the length and breadth of nineteenth-century supernatural horror in English literature.

While there may still be forays into mid-Victorian works, I intend to narrow the focus of my exploration of supernatural fiction in English Literature to the 1880s through 1920–the late Victorian through the Edwardian and maybe a bit beyond. I do this, in part, because the penny dreadfuls of the 1840s, 1850s, and early 1860s say more about the evolution of publishing and the growth of literacy rather than the development of the horror genre–Varney the Vampyre notwithstanding. Authors, such as Bram Stoker, Aleister Crowley, Arthur Conan Doyle, William Hope Hodgson and myriad others, grew up and began to write in the lifetime of Queen Victoria, continuing their careers through Edward's reign and beyond. These authors carried their nineteenth-century Victorian attitudes and beliefs with them into the new century. For instance, it would be a challenge for anyone to say that Arthur Conan Doyle's The History of Spiritualism (Two volumes) is not the work of a Victorian gentlemen, though it was published in 1926.

[i] From The Vault of Ghastly Tales. "A Strange Christmas Game." Narrated by Michael Whitehouse. http://www.vaultofghastlytales.com/2015/12/a-strange-christmas-games-by-j-h-riddell.html

[ii] A fine series of reprints and collections which, as I have stated in previous posts, I wholeheartedly endorse.

[iv] All the above points, and others as well, are taken from an interview with Amanda DeWees in "Forever New: Women and Supernatural Fiction." 16 November 2016. http://greydogtales.com/blog/forever-new-women-supernatural-fiction/