Exploring WEIRD TALES – “I, the Vampire” by Henry Kuttner

Continuing my studies into vampire horror fiction and furthering my exploration of select tales in Weird Tales magazine, I discovered “I, the Vampire” which is unique and refreshing. Rather than gloomy gothic castles, this story takes place in the bright lights of 1930s Hollywood. At the same time, “I, the Vampire” pays homage to more traditional vampire tropes. 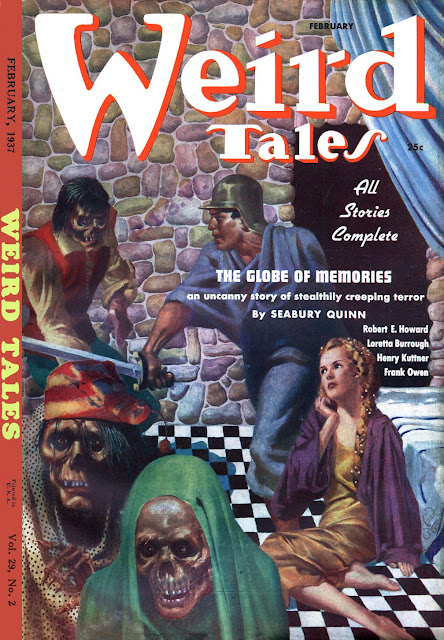 A charming man, the Chevalier. Or so he seemed. Slender, below medium height, his bland, round face seemed incongruously youthful. Blond hair was plastered close to his scalp. I saw that his cheeks were rouged—very deftly, but I know something about make-up. And under the rouge I read a curious, deathly pallor that would have made him a marked man had he not disguised it. Some disease, perhaps, had blanched his skin—but his lips were not artificially reddened. And they were as crimson as blood.

He was clean-shaved, wore impeccable evening clothes, and his eyes were black pools of ink.

“I, the Vampire” was written by Henry Kuttner and first appeared in print in the February 1937 issue of Weird Tales (v29 n02).

Weird Tales is an American pulp magazine specializing in horror and fantasy. It was founded in late 1922 with its first issue dated March 1923. Weird Tales was known for printing works of H. P. Lovecraft, Robert E. Howard, Seabury Quinn, Robert Bloch and many, many other notable genre authors. Plagued throughout its existence with financial woes, Weird Tales ended its initial publication run in 1954. Subsequently there were several attempts to restart the magazine. The current incarnation’s latest issue was dated Spring 2014.

The Pulp Magazine Archive at archive.org is a comprehensive source. It maintains a sizeable percentage of the Weird Tales print run in PDF format (in addition to countless other pulp magazines).

At a studio party in 1920s or 1930s Hollywood, Mart and Jean meet a new and mysterious foreign actor, the Chevalier Futaine. Later, strange deaths from “throat infections,” broken necks, dead bodies that scream while being cremated and super secret impregnable crypts all lead Mart to one conclusion. He must rescue Jean from Futaine! In that attempt, Mart fails; Futaine is too strong. However, at the end, Futaine’s humanity resurfaces and he spares Jean. Futaine then, releases Mart with the understanding that Mart visit Futaine while the vampire sleeps.

Prior to encountering “I, the Vampire,” I was superficially aware of Henry Kuttner as an author of weird fiction. I had heard of him in regard to the genre and time period, but I had not read any of his works. I was introduced to Kuttner and “I, the Vampire” via HorrorBabble podcast’s audio narration from 08 March 2019. 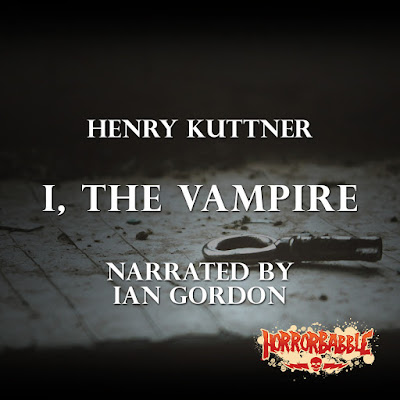 Honestly, I enjoyed the hell out of it. So much so, that I tracked down the issue of Weird Tales that it appeared in and acquired the PDF of the issue from The Pulp Magazine Archive. 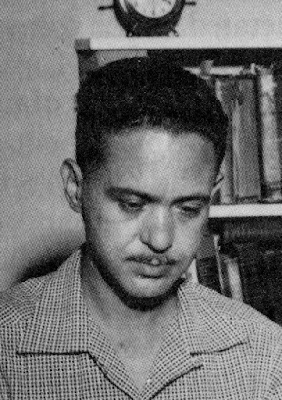 Henry Kuttner, born on 7 April 1915 in Los Angeles, would become an incredibly prolific author of the science fiction, fantasy and horror genres. His earliest known published piece, from the March 1936 issue of Weird Tales, was “The Graveyard Rats”—a terrifying tale of a cemetery, of grave robbing, and of rats…big rats…many big rats.

Throughout his career, Kuttner worked in close collaboration with his wife, C.L. Moore; herself a noted author. They met through being members of the “Lovecraft Circle”—genre writers and like-minded individuals who regularly corresponded with H. P. Lovecraft. Many of Kuttner’s early works contributed to the growing corpus of Cthulhu Mythos tales. Kuttner became friends with Lovecraft, Clark Ashton Smith, and Robert Bloch (among others). Interestingly enough, in addition to being associated with such weird fiction and fantasy authors, Kuttner is also described as a mentor to Ray Bradbury.

In 1958, Henry Kuttner died of a heart attack in Los Angeles. 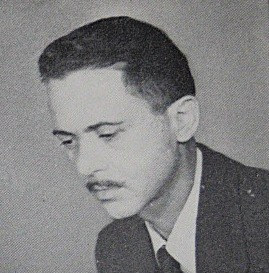 From its invention in Polidori’s The Vampyre (1819) through Varney the Vampire (1847), “Carmilla,” (1872) and Dracula (1897), the European aristocratic figure of the traditional literary vampire transitioned from a blood-sucking predator into a tragic figure. This theme of transition continues in “I, the Vampire.” Despite the death and suffering caused by Futaine, he surrenders everything to save the woman who reminds him of his long gone love.

While not a major work in the development of vampire literature, “I, the Vampire,” nevertheless, is an entertaining and enjoyable read. It furthers the transition of the blood-drinking vampire into a tragic and noble romantic figure who gives up eternity for love’s sake.

Exploring AMAZING STORIES – “When Atlantis Was” by H. F. Arnold

Horror fiction takes many forms – from the long, slow build-up to the short, sharp shock. Much of what I have commented on previously has been of the longer, more detailed variety. And, while I will continue to examine such works, I turn now to the pages of Amazing Stories magazine for a dose or two of the short, sharp shock.

This post looks at another of H. F. Arnold’s writings. When Atlantis Was is a wild, far-reaching tale, full of the utterly unexpected. 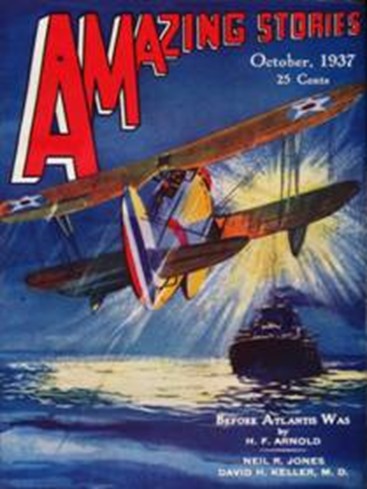 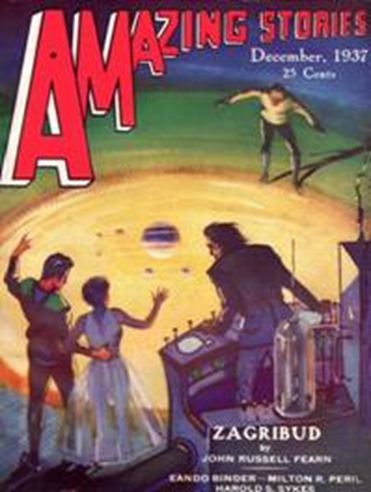 “We’ve been moved! Some force or other has snatched us up and moved us, ‘McGinty’ and all. But where—well that’s another story. There’s only several guesses I can make. We’ve either been moved to some spot on earth where conditions are different than anything anybody ever encountered before; we’ve been taken from the earth to somewhere else; or we’ve been moved in time. And by golly, I’ll swear the last is the answer.”

First published as a serial in the pulp magazine, Amazing Stories, “When Atlantis Was” appeared in the October 1937 and December 1937 issues.

More impressively, despite going through changes including some breaks in print, Amazing Stories is still in publication! Recently the magazine ceased after 2005 and returned in 2012 as an online magazine. In late 2018, Amazing Stories became available in print again.

The Pulp Magazine Archive at archive.org is a truly comprehensive source for pulps. In addition to countless other pulp magazines, it contains a goodly portion of the Amazing Stories print run in pdf format.

The day was May 1, 1934. The U. S. Navy fleet is conducting military exercises in the south Atlantic. USS Farragut a.k.a. “McGinty” is the lead vessel of a destroyer squadron scouting ahead of the main battle line. Emerging from a smoke screen following a tricky maneuver, the “McGinty” and her crew find themselves alone in an empty ocean. The fleet is gone!

And it only gets weirder from here…

•By various means, the crew determines that by some mysterious process they have been transported 50,000 years into Earth’s past.

•In a seemingly unrelated aside, the crew notices that the moon is much larger in the sky, because it is so much closer. They are able to see clouds on its surface. They also noticed that the moon was moving away from Earth rapidly and losing atmosphere.

•While exploring potential campsites, the crew battles pterodactyls and even a huge T-Rex type of creature. 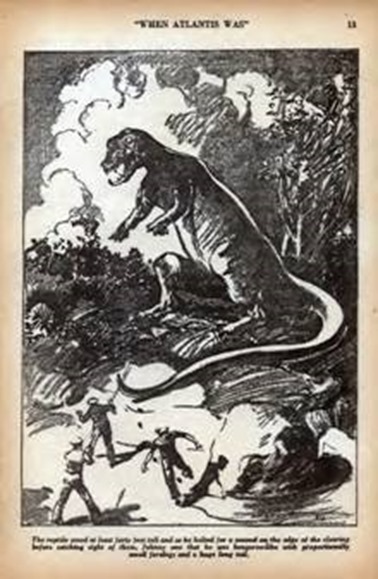 •They witness an enormous object roaring out of the sky and see it crash in the distance. Initially believing it to be a meteor, they realize quickly that the quarter-mile long thing is actually a vessel!

•Members of the crew of the “McGinty” explore the massive rocket ship and meet survivors. The survivors are Lunarians—closely related to humans, but more technologically advanced—from the moon. “McGinty” crew determine that the rocket ship is an ark from the Lunar civilization.

•The Lunarian survivors are comprised of 80 female Lunarians. Coincidently, the crew of the “McGinty” also just happens to be made up of 80 males. Quite the coincidence, indeed.

•The men reconcile themselves to a new life in the deep past; especially now that the sailors have begun to pair up with the Lunarian women.

•The combined crew struggle to find a site to establish a permanent home. They settle on searching for an island in the Atlantic that 20th century mythology informs them should be inhabited at this time—Atlantis.

•On arriving at what they are certain is the island of Atlantis, they are pleased to find it very hospitable, but perplexed to find it completely uninhabited. Where are the early Atlanteans?

•One of the officers works out that there are no Atlanteans . . . Yet. The men of the “McGinty” together with the Lunarian women would, at some point in the future, become the Atlanteans.

•Epilogue—Back in the present time (1935), a bathysphere sinks down exploring the south Atlantic depths. At 25,000 feet, it hits bottom. Neither the man in the sphere or the researchers on the surface realize that mere feet below the bathysphere rest the remains of what was Atlantis.

“When Atlantis Was” is amazing!

and presents them in a wild-ride of a story.

In addition, I also firmly believe that “When Atlantis Was” was an influence upon the 1980s movie The Final Countdown. 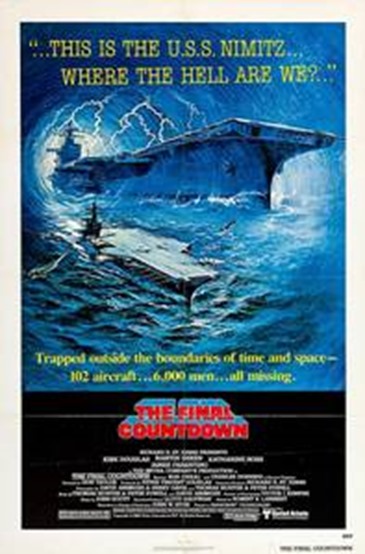 This film centers on the carrier USS Nimitz. While on maneuvers, a mysterious storm sends Nimitz back to December 6, 1941. And everything that that date implies.

I really loved this wacky story.