Exploring WEIRD TALES – “The Seed from the Sepulchre” by Clark Ashton Smith.


Horror fiction takes many forms – from the long, slow build-up to the short, sharp shock. Much of what I have commented on previously has been of the longer, more detailed variety. And, while I will continue to examine such works, I turn now to the pages of Weird Tales magazine for a dose or two (or more!) of the short, sharp shock.

This blog post begins an occasional (and limited) foray into the horror fiction sub-sub genre of . . . Plant Horror! And, once again, I was introduced to this tale via an audio narration of it; but, more on that later.

My love of “creature features” is well known, as previous posts have noted. But that grouping includes more than just giant prehistoric bears. It also includes weird and wild man-eating plants—hence, Clark Ashton Smith’s “The Seed from the Sepulchre.”

“The Seed from the Sepulchre” serves as an ideal introduction to the topic of plant horror.
§ 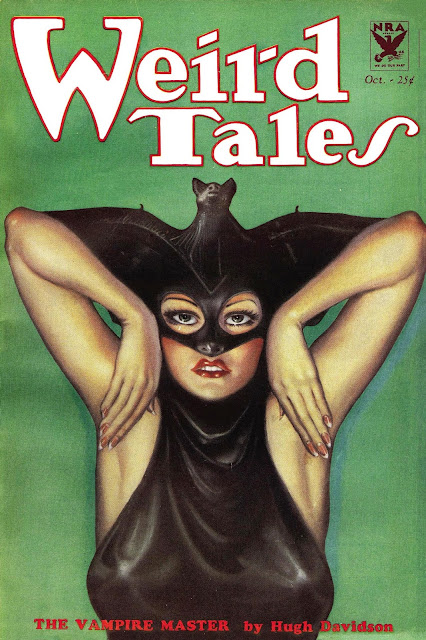 At the same time, abruptly and mysteriously, Falmer opened his eyes and appeared to regain full consciousness. For a few minutes he was more his normal self than at any time since his return from the ruins. He began to talk, as if anxious to relieve his mind of some oppressing burden. His voice was peculiarly thick and toneless, but Thone was able to follow his mutterings and piece them together.

"The pit! The pit!" said Falmer—"the infernal thing that was in the pit, in the deep sepulcher! . . . I wouldn't go back there for the treasure of a dozen El Dorados. . . . I didn't tell you much about those ruins, Thone. Somehow it was hard—impossibly hard—to talk."

"I guess the Indian knew there was something wrong with the ruins. He led me to the place . . . but he wouldn't tell me anything about it; and he waited by the riverside while I searched for the treasure.

"Great grey walls there were, older than the jungle—old as death and time. They must have been quarried and reared by people from some lost planet. They loomed and leaned at mad, unnatural angles, threatening to crush the trees about them. And there were columns, too: thick, swollen columns of unholy form, whose abominable carvings the jungle had not wholly screened from view.

“The Seed from the Sepulchre” was written by Clark Ashton Smith, first appearing in print in the October 1933 issue of Weird Tales (v22 n04).

Weird Tales is an American pulp magazine specializing in horror and fantasy. It was founded in late 1922 with its first issue dated March 1923. Weird Tales was known for printing works of H. P. Lovecraft, Robert E. Howard, Seabury Quinn, Robert Bloch and many, many other notable genre authors. Plagued throughout its existence with financial woes, Weird Tales ended its initial publication run in 1954. There were several subsequent attempts to restart the magazine. The current incarnation’s latest issue was published August 2019.

The Pulp Magazine Archive at archive.org is a comprehensive source. It maintains a sizable percentage of the Weird Tales print run in PDF format (in addition to countless other pulp magazines).

A great deal has been written about Clark Ashton Smith and his various artistic endeavors, especially literary. Clark Ashton Smith was a renowned author of weird and fantastic fiction as well as  being a highly respected artist, poet and sculptor. I will only mention a few pertinent facts regarding him leaving further exploration to the reader.

Born in 1893, Clark Ashton Smith began writing tales at a very young age. Later, in 1922, with the publication of a poetry collection, Ebony and Crystal, he received a fan letter from H. P. Lovecraft that began:

I trust you will pardon the liberty taken by an absolute stranger in writing you, for I cannot refrain from expressing the appreciation aroused in me by your drawings & poetry, as shown me by my friend, Mr. Samuel Loveman, whom I am now visiting in Cleveland. Your book, containing matter only chronologically classifiable as juvenilia, impresses me as a work of the most distinguished genius; & makes me anxious to see the new volume which I understand is in course of preparation.

Their friendship would last until Lovecraft’s death in 1937. It is due to this inclusion within the Lovecraft fandom, along with many others such as Robert E. Howard that Clark Aston Smith’s familiarity among modern audiences is, in large part, due.

As is the case with many pulp tales, I was introduced to “The Seed from the Sepulchre” via an audio narration. Edward E. French’s Fiction Fantastique on YouTube is one of the best narration sites I have come across. His narrative skill, high production value and interesting selection of subject matter come together to mark him as top tier in audio narrators. I urge all my readers to give him a listen. 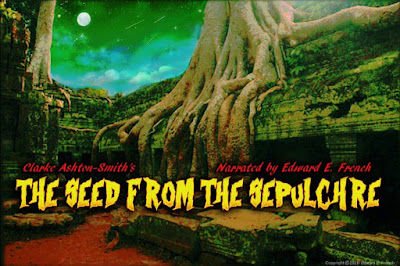 In his presentation of “The Seed from the Sepulchre,” French delivers the emotions manifested by Thone and, in particular, the terror felt by Falmer with masterful skill.

In brief, this tale is set in Venezuela where two men, Thone and Falmer, professional orchid hunters, along with two Indian guides, decide to try their hand at treasure hunting and pursue a rumor of lost ruins and buried gold. While Thone recovers from a fever, Flamer continues on to explore the ruins, taking one of the guides with him.

Falmer returns to camp after three days. He found the ruins as well as the pit of so-called legendary treasure. Falmer seems preoccupied and reluctant to talk about his experience. As Thone recovers, Falmer becomes feverish. As if in a crazed delirium, Falmer relates to Thone what actually happened to him at the ruins.

The Indian guide refused to get anywhere near the ruins which Falmer remarked looked older than mankind, and were composed of weird angles. After locating the pit where the treasure was rumored to be, Falmer climbed down into it. Littered with human bones, a few skeletons had plants growing out of them. Falmer inadvertently brushed up against one of these, causing a pod on the plant to burst—engulfing his head in a fine gray-ish power.

At this point, Falmer breaks off his narration crying out that something is growing in his brain, that “ancient devil-plant.” Due to this suffering Thone heavily sedates Falmer. While examining him, Thone discovers a plant-bud growing out of the top of Falmer’s head. Still weak from his own fever, Thone notices that the Indian guides have deserted them.

Next morning, Thone sees his friend dead. It appeared the plant’s roots “were draining his blood, were devouring his very flesh . . .” 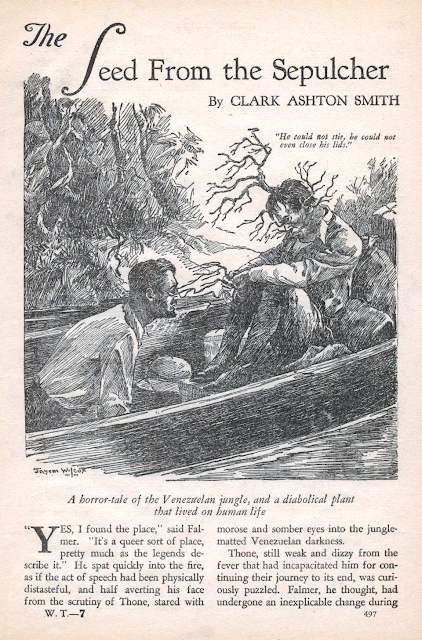 After a few more days, Thone realizes that he is under some sort of hypnotic trance with the Falmer/plant-thing drawing him closer and closer until his head rests against Falmer’s withered hands. Emerging from the tips of the fingers of those withered hands were tiny white rootlets twisting gently in the air. Helpless to resist, Thone feels the rootlets moving over his head, then sharp needle-like pricks. He could not even close his eyes as the rootlets pierce his eyeballs.

The plant lived on.

Previously, I have mentioned other sub-genres of horror fiction—in particular, and most recently, “natural horror” also called “creature feature.” “Creature feature” can not only include flocks of birds, large sharks, creepy plants, and great bears, but also Bigfoot and even King Kong. Things such as Frankenstein’s monster, werewolves, vampires, monstrosities such as from H. G. Wells’ Food of the Gods, the triffid-plants from The Day of the Triffids, radioactive spawn such as giant ants, tarantulas and Godzilla’s ilk are also considered part of the “creature feature” sub-genre.

Following careful and considered thought, I believe that “natural horror” and “creature feature” are both, in fact, different but equal sub-genres of horror fiction. I would like to propose that “natural horror” should reflect elements of the natural world threatening humanity; i.e. birds, sharks, bears and even strange plants. Potentially, this also can include things of Nature unbeknownst to science at this time. While “creature features” reflect beasts, beings or things that are not from Nature; i.e. supernatural, extraterrestrial, or man-made —whether from a laboratory or otherwise.

A more detailed discussion on what “plant horror” involves will be held for a subsequent post. However, I would like to call the readers’ attention to these plot-points from this story:

•ruins are of unknown origin, hints at ancient and weird beginnings

•pit in ruins is where monster is; lots of human bones.

•people are lured into the pit.

•creature is like a sentient thing, maybe even from another world

Fans of horror will recognize many of these plot elements as staples of the genre that will  reappear again in future tales of “plant horror.”

“Plant horror,” at its core (while not as common or as well-utilized a sub-genre as vampires or such) does follow certain horror tropes: in ancient ruins lurk bad things that hurt us. Despite being a short story from the pages of Weird Tales, “The Seed from the Sepulchre” was a surprisingly complex story, revolving around body-horror and lingering terror.