Exploring AMAZING STORIES – “The Coming of the Ice” by G. Peyton Wertenbaker

Horror fiction takes many forms – from the long, slow build-up to the short, sharp shock. Much of what I have commented on previously has been of the longer, more detailed variety. And, while I will continue to examine such works, I turn now to the pages of Amazing Stories magazine for a dose or two of the short, sharp shock.

This post considers G. Peyton Wertenbaker’s “The Coming of the Ice.” A potent and sorrowful tale that is loosely associated with time travel fiction. 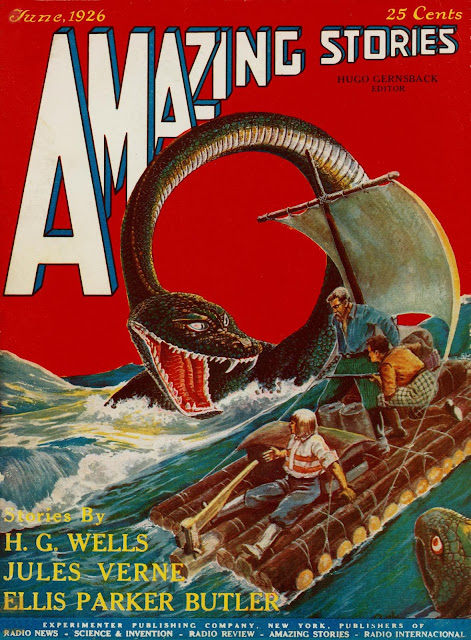 It is strange to be alone, and so cold. To be the last man on earth....

The snow drives silently about me, ceaselessly, drearily. And I am isolated in this tiny white, indistinguishable corner of a blurred world, surely the loneliest creature in the universe. How many thousands of years is it since I last knew the true companionship? For a long time I have been lonely, but there were people, creatures of flesh and blood. Now they are gone. Now I have not even the stars to keep me company, for they are all lost in an infinity of snow and twilight here below.

If only I could know how long it has been since first I was imprisoned upon the earth. It cannot matter now. And yet some vague dissatisfaction, some faint instinct, asks over and over in my throbbing ears: What year? What year?

It was in the year 1930 that the great thing began in my life.

First appearing in the June 1926 issue of Amazing Stories, volume 1 number 3, Wertenbaker’s “The Coming of the Ice” was printed when Wertenbaker was only nineteen years old! He had a story printed in each of the first three issues of Amazing Stories. The first issue, April 1926, reprinted his “The Man from the Atom.” The May 1926, second issue saw his tale “The Man from the Atom (sequel)” published for the first time. And, the 3rd issue, June 1926, included the story under consideration here.

Wertenbaker would publish three further tales in Amazing Tales; one in each of the years 1929, 1930 and 1931. Following these pulp sci-fi shorts, Wertenbaker turned away from genre fiction. In 1958, he joined NASA where eventually he rose to chief historian of the Aerospace Medical Division. He passed away in 1968.

“The Coming of the Ice” would appear once again in the pages of Amazing Stories, reprinted in the July 1961 issue—35 years after its debut. 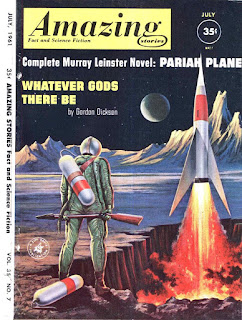 Amazing Stories is an American pulp magazine dedicated to science fiction stories; the first magazine devoted exclusively to publishing sci-fi tales. More impressively, despite going through many changes including some breaks in print, Amazing Stories is still in publication! Recently the magazine ceased after 2005 and returned in 2012 as an online magazine. In late 2018, Amazing Stories became available in print again.

The Pulp Magazine Archive at archive.org contains a good portion of the Amazing Stories print run in PDF format. It is a truly comprehensive source for pulps. I highly recommend it.

“The Coming of the Ice” by G. Peyton Wertenbaker is a moving and sorrowful tale that, in my opinion, is imaginatively related to time travel fiction.

Seen through the eyes of the narrator/protagonist named Carl Denell, this tale spans vast and enormous tracks of time. Told via a series of flashbacks, as revealed in the opening quote, this story opens at the end…With Denell, the last man on Earth, alone on a frozen and dead world.

The initial flashback describes how it all began, the means by which Denell became immortal. The flashback begins with “it was in the year 1930 that the great thing began in my life.” An occurrence that happened unimaginably vast epochs ago.

Denell can recall only a “few isolated periods clearly.” This manner of relaying his experiences calls to mind jumps in time usually seen in time travel fiction. For example, the first such “isolated period” took place in the year 2132. Denell realizes that he is limited by the fact that he is still a man from the 20th century, no matter how many centuries he has passed through.

In another jump-forward-in-time flashback, this time in the year 6371, Denell details how Earth was visited by beings (or “men”) from Venus. Shortly after their arrival, the Venusians returned home, because they were too different from humans of that time.

After a hundred centuries (the year 10,000), humanity has evolved (devolved?) huge brains and tiny weak bodies (as shown in the title page image below). With these changes to the human form, Denell is now the last example of mankind’s original form. 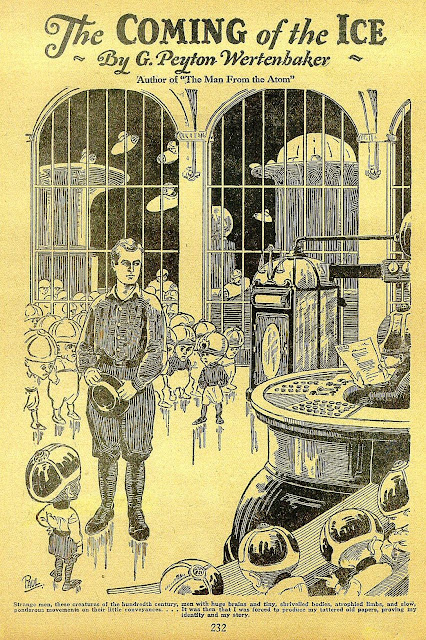 With the development of such large brains, Denell saw the men of the time welcome the rise of telepathy and the end of the spoken word. He also witnessed them develop immortality, along similar lines to his own, be adopted by every other person on Earth.

Over the ensuing millennia, any record-keeping of times past fell to disuse. After all, what good were records of the past when one’s entire race was immortal? However, this lead to an unexpected problem. As the climate grew ever colder, mankind had forgotten that ice ages are cyclical; and sometimes they come back!

By around the year 200,000 (Denell had to guess, as none knew for sure), he saw the death of civilization. The evolved humans reduced bodies were no match for the bitter conditions. Denell records this account even though he knows that no human will ever read it. And with the passing of the last group of survivors, Denell is  alone…alone on a frozen and dead Earth.

In my earlier posts commenting on Stephen King’s 11/22/63, related topics and time travel fiction in general, I took some pains to describe “The Means of Time Travel;” whether by some weird wormhole-like phenomenon or some technological device. In “The Coming of the Ice,” rather uniquely, the method of achieving travel through time, or maybe enduring through time, utilized surgical methods.

The inventor of this technique describes it as “I found that I had only to close certain organs, to re-arrange certain ducts, and to open certain dormant organs.” He explained further:

“You have heard, of course, that our bodies are continually changing, hour by hour, minute by minute, so that every few years we have been literally reborn. Some such principle as this seems to operate in reproduction, except that, instead of the old body being replaced by the new, and in its form, approximately, the new body is created apart from it. It is the creation of children that causes us to die, it would seem, because if this activity is, so to speak, dammed up or turned aside into new channels, the reproduction operates on the old body, renewing it continually. It is very obscure and very absurd, is it not? But the most absurd part of it is that it is true. Whatever the true explanation may be, the fact remains that the operation can be done, that it actually prolongs life indefinitely, and that I alone know the secret.”

So, as I understand it, by surgically redirecting the energies of reproduction back upon the individual a self-renewing immortality is achieved. Interesting! Perhaps  this work was a reflection or manifestation of the times’ attitude towards eugenics, which applied the concepts of genetics and racial heredity for the purpose of improving the human race.

I believe “The Coming of the Ice,” should be considered a work of time travel fiction, in part, by how it treated and described time jumps. It should be kept in mind also that this story was written by a nineteen-year old back in 1926!

Though not possessing the short, sharp shock of many of my favored pulp tales, “The Coming of the Ice,” still nevertheless, was an enjoyable and melancholy read. Well worth your time.