Thinking about “The Jaunt” by Stephen King

In my ongoing exploration of time-travel fiction, the following piece is a truly wild variation on that theme. That the tale was also written by Stephen King is a delightful bonus. “The Jaunt” uses time travel, not as the goal but rather a psychological side-effect. “The Jaunt” strives to answer a horrifying question—what happens when you time travel a billion years; but, while for your body no time has passed, because of the misuse of technology, your mind is forced to endure each and every moment of those billion years in its dreadful entirety? 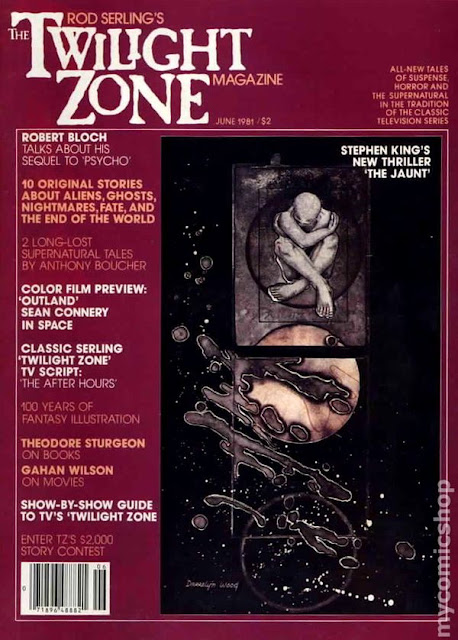 “So far as we know,” he began, “the Jaunt was invented about three hundred and twenty years ago, around the year 1987, by a fellow named Victor Carune. He did it as part of a private research project that was funded by some government money... and eventually the government took it over, of course. In the end it came down to either the government or the oil companies. The reason we don't know the exact date is because Carune was something of an eccentric – ”

“You mean he was crazy, Dad?” Ricky asked.

“Eccentric means a little bit crazy, dear,” Marilys said, and smiled across the children at Mark. She looked a little less nervous now, he thought.

“Anyway, he'd been experimenting with the process for quite some time before he informed the government of what he had,” Mark went on, “and he only told them because he was running out of money and they weren't going to re-fund him.”
[page 188] 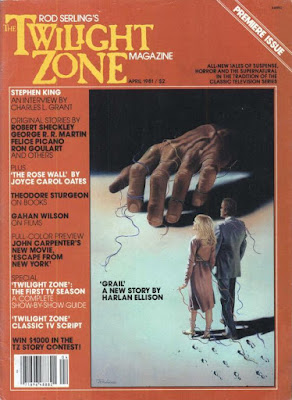 By 1983, under Klein, The Twilight Zone Magazine was highly successful. Following Klein’s departure (and a short succession of editors) the publication run of The Twilight Zone Magazine came to an end with its final issue—June 1989.
In 1985, “The Jaunt” was gathered into the collection Skeleton Crew, published by G. P. Putnam’s Sons. This collection was headlined by the novella “The Mist,” while “The Jaunt” was sixth of the twenty-two tales. 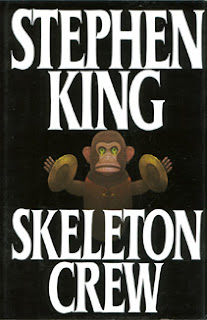 §
There is no need to go into the life and career of Stephen King. More than enough has been written about that subject already. I am more than happy to report that his catalogue of works is enormous, comprehensive . . . and still growing!
§
The opening quote places this story 320 years previous, in the year 1987, approximately. Therefore, the time of this tale is roughly 2307. 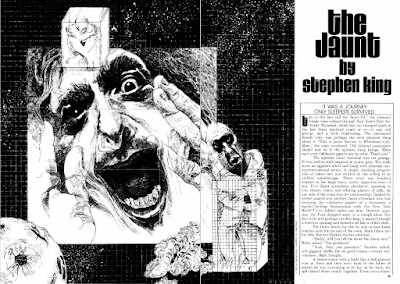 A family sits in the sleep lounge of the New York Port Authority waiting to journey to Whitehead City on Mars; the Oates family—Mark, Marilys, Ricky (12 years old) and Patricia (9 years old). In order to distract his wife and kids, Mark tells the story of how jaunting was discovered. How between 1960 and 2030, most of Earth’s water was poisoned. How, now because of jaunt technology, water is the major import from Mars. He explains that “jaunt” is simply teleportation, no more and no less. Also, how the inventor Victor Carune named the process after his favorite early sci-fi tale, Alfred Bester’s “The Stars My Destination.”.
This brings me to a happy side-note. A fringe-benefit of this blog has been the delightful journey of discovery that I find myself upon. Through my research into horror fiction, I have come across many new (to me) stories. I have read and contemplated many wondrous tales and amazing thoughts. In fact, I sometimes believe that Old Sins Cast Long Shadows is just an excuse for me to research more interesting tales to explore. Anyway, back to “The Jaunt.”
After relaying the particulars of the discovery of teleportation, Mark went on to describe the inherent flaw in jaunting—living creatures cannot jaunt while conscious. Therefore, people using jaunt technology had to be anesthetized with a kind of sleep gas.
To further convince his family that taking sleep gas was for the best, Mark told of the first human test subject, a brutal convict-prisoner, to jaunt fully conscious. When he stepped  out on the other side, despite no time passing, the convict’s hair had turned white; his face giving the impression of awesome age. The only words he spoke before expiring, “It’s eternity in there.”
At this point in the tale, Stephen King began to drop a few low-key clues regarding the direction the story was headed and the possible nature of the horror about to manifest.

The following extended quote describes an exchange between Mark and Ricky, where Mark begins to understand that Ricky is not afraid, but rather fascinated with the horror of jaunting while awake.

. . . Something was dawning in Ricky's eyes. Fright? Excitement? “It isn't just teleportation, is it, Dad? It's some kind of time warp.” It's eternity in there, Mark thought. “In a way,” he said. “But that's a comic-book phrase -- it sounds good but doesn't really mean anything, Rick. It seems to revolve around the idea of consciousness, and the fact that consciousness doesn't particulate -- it remains whole and constant. It also retains some screwy sense of time. But we don't know how pure consciousness would measure time, or even if that concept has any meaning to pure mind. We can't even conceive what pure mind might be.”

Mark fell silent, troubled by his son's eyes, which were suddenly so sharp and curious. He understands but he doesn't understand, Mark thought. Your mind can be your best friend; it can keep you amused even when there's nothing to read, nothing to do. But it can turn on you when it's left with no input for too long. It can turn on you, which means that it turns on itself, savages itself, and perhaps consumes itself in an unthinkable act of auto-cannibalism. How long in there, in terms of years? 0.000000000067 seconds for the body to Jaunt, but how long for the unparticulated consciousness? A hundred years? A thousand? A million? A billion? How long alone with your thoughts in an endless field of white? And then, when a billion eternities have passed, the crashing return of light and form and body. Who wouldn't go insane?

The above clearly suggests—in my opinion actually reveals—the horror that is to come.
⁕⁕
Mark awakens to screaming. He knows why.

He had seen. It hadn't been fright in Ricky's eyes; it had been excitement. He should have known, because he knew Ricky -- Ricky, who had fallen out of the highest crotch of the tree in their backyard in Schenectady when he was only seven, who had broken his arm (and was lucky that had been all he'd broken); Ricky who dared to go faster and further on his Slideboard than any other kid in the neighborhood; Ricky who was first to take any dare. Ricky and fear were not well acquainted.
(Page 205).

Ricky had faked taking the gas. He had jaunted fully conscious and paid the price.
Mark could do nothing for his son…except scream.
§
I have to say that I truly appreciated the growing sense of foreboding this tale created; especially for a short story. The manner in which the story began was exemplary. It left me clueless regarding where the story was headed. But once the fate of the convict-prisoner was explained, followed quickly by Ricky’s reaction, I knew  that I now had a focus for that sense of foreboding. From that moment, the tale roars through to its inevitable conclusion. Fantastic!
Ricky brings it up first. The Jaunt technology creates a kind of time warp. This is his 12-year-old mind conceptualizing it to the best of his limited ability. Mark, being much older, has a much more nuanced understanding of it. He can perceive the potential for mind-breaking horror if jaunt technology is abused.
Mark understood that the mind can turn and become an enemy until both body and mind are destroyed. Though the process of jaunting for the body is instantaneous, for all practical purposes, Mark wondered about a human consciousness, awake and aware?
When the terrible results of Ricky’s daredevil action were realized, shock and chaos were the outcome. More than mere physical changes had occurred to Ricky. To the attendants and others around, he had become other:
⁕          “The thing that had been his son . . .” This was used twice.
⁕          “. . . a creature older than time masquerading as a boy . . .”
⁕          “. . . lunatic cackles . . .”
⁕          “. . . clawed its own eyes out.”
These phrases, each in regards to Ricky after his jaunt, focus the reader to the un-humanness that had befallen him. From a twelve-year-old boy, he had become a “thing,” a lunatic,” an “it.” This is a twelve-year-old boy?! But, by his misuse of the jaunt process, Ricky had become something forever broken.
§
In Stephen King’s “The Jaunt,” time travel is presented as an unanticipated byproduct of the technology of teleportation. Additionally, the “rules” which govern this technology are laid out. , The terrible consequences of breaking those rules call to mind the Obdurate Past from King’s 11/22/63: A Novel.
One of my all-time favorite tales of horror, “The Jaunt” combines true existential cosmic horror with the inherent terror and unreality of time travel. Though unconventional as a time-travel story, the strength of “The Jaunt” lay in focusing the reader’s attention to the possibility of the horror of time travel—both for the traveler as well as the people waiting for the traveler on the other side.